Because the past few nights have been spent not sleeping well, I’m starting to think about a television and whether or not I need one of them in the room where I sleep. As anyone who knows me can tell you, I’m really great at falling asleep during television shows and movies. Something to consider.

Three months ago I would never peg myself as someone who would Google, “Talk to me about pergolas.” or “What’s that thing on top of a pergola called? Canopy? Awning?” or “Where can I get a pergola cover for ten bucks?” (There is no such pergola cover.) Also, “DIY pergola cover?!”

I finished my February Lady Sweater, and I finally blocked it on Friday. It’s still slightly wet, but I’m wearing it anyway. 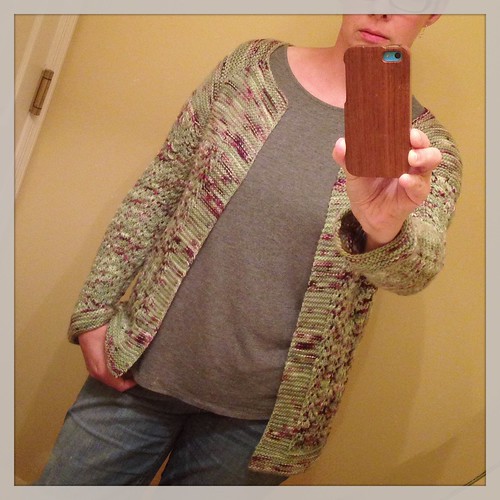 I like the length, but I wish it was bigger around so I could wrap it a bit. BUT, I’m unwilling to compromise length for width, so it’ll do. (I’ve decided to NOT put buttons on the sweater because I sort of like how it looks without. SO, it will be a sweater with buttonholes, but nothing to fill them. It will be my metaphorical sweater.)

(For all of you knitters out there, my friends Tempe and Chrystal have started a video podcast. It’s called Lighthouse Buddies, and if you knit while you watch, it almost feels like you’re in the living room with them, although their living rooms are about 875 away from each other.)

I have registered to be a Girl Scout so that Harper and I can attend a troop meeting on Thursday evening. This will be Harper’s first run in the Girl Scout rodeo, and I’m not quite sure if I’ll laugh or cry when/if the word Camping is mentioned. (A friend of mine once gave me this luggage tag, and it really was the perfect gift.) I’ll keep you updated. ‘ ‘ ‘text/javascript’>

15 thoughts on ““I could cover it in Bougainvillea,” she whispered during the throes of sleep-deprived madness.”