I haven’t been here in a bit, and my plan was to do a Fluid Pudding Year in Review complete with a side tribute to Ed Herrmann (He died of brain cancer yesterday, meaning he missed being placed on all of those Gone But Not Forgotten montages that television loves so much.) and that would surely lead me into live blogging all seven season of Gilmore Girls as I sit on my couch and cry into my crumb cake (My sister made the cake. It’s very good.) wearing nothing but fleece pajamas, a robe, and fluffy socks.

Wasting your time with my melodramatic tales and ruminations from 2014 is pretty pointless, because you were there with me for most of it. Ah, but someone (perhaps it was Merlin Mann?) once said something about how you have to turn around and make amends with the past before embarking on the future.

Instead of a serenade, I’ll simply chirp.

In January of 2014, I injected Scout’s plasma into my own body and Meredith won her school spelling bee.

In February, I drew pictures on my colon.

In March, I shared a bit of my Lazy Journal.

In April, I began the search for a fuzzy coping vest and the girls blew out candles and threw pottery. (By the way, I believe I’ve found my fuzzy coping vest. It involves hot tea and breathing with a bit of attempted meditation. I’m hoping to add yoga to the mix this year. I already have the pants.)

I had all of my lady parts removed in May (except for Leftie the ovary, who is currently holding down the house), and I took a bunch of photos while under the influence of morphine.

In June, we placed a sign in our front yard.

In July, I laughed until I cried, we found our house, and we had to say goodbye to Sidney.

We moved into the house in August and I immediately started bitching about things that really don’t matter, unless a kitchen sink really DOES matter.

In September, we left the old house for the final time and I finished a cardigan.

The world continued to spin in October without much input from me. With that said, I did make a cowl or two.

I participated in NaBloPoMo in November, meaning I invited you over every single day. I gave you a tour of the house, my parents celebrated their 50th anniversary, and many people in St. Louis came together to demand change. (And change is still happening and will hopefully continue to happen so that our children’s children can look back on this time and say, “Thank God we’ve broken that cycle.”)

I threw some PVCs in December and as a result, I bared my midriff. Also, I received my very first speeding ticket and we had to say goodbye to Ramona, which was absolutely horrible and I still leave sinks dripping for her and doors cracked so that she can come into the bathroom while I’m showering. Losing two cats in five months is definitely not recommended.

I participated in the Christmahanukwanzaakah Online Blogger Concert on December 18th.

I was a reader at our church on December 21st, and I absolutely love reading although it scares the crap out of me, Eleanor Roosevelt.

I’m starting to bore you. I can feel it. Please know that I’m trying my hardest to wrap things up, although I’d hang out with you all day if I could.

Christmas morning? Perfection. I was up at 5:00 and had nearly an hour to sit and stare at the tree while breathing and drinking coffee.

On December 30th we headed to a photography place with my parents and my sister and her family. I would share the huge family photo here, but I haven’t yet procured the proper model release forms. Instead, I’ll split the difference and show you the photo taken of the four of us. It’s a good one, although it makes me look like my left arm has more stretchability than the average left arm. 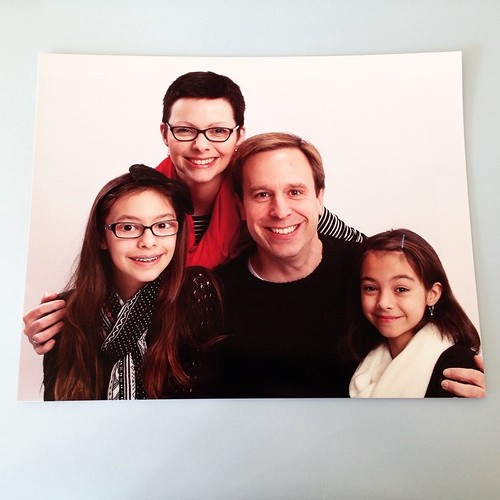 Finally, on New Year’s Eve, my nephew joined us to watch the Saint Louis University basketball team miss a bunch of free throws which led to Vanderbilt taking the win. Afterwards, I made out with a statue named Doug. 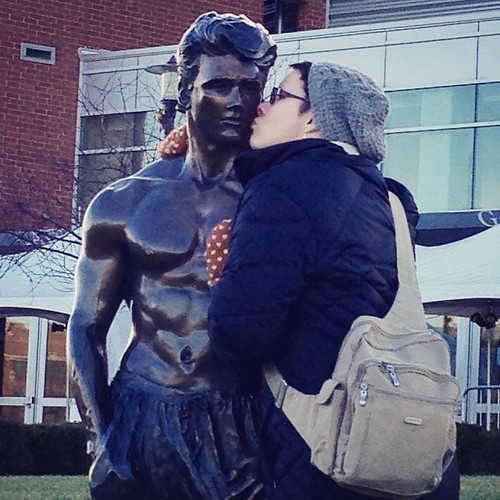 This earned me a Statue Makeout Party Hat Trick, as I canoodled with Patrick Kavanagh in Orlando last year, 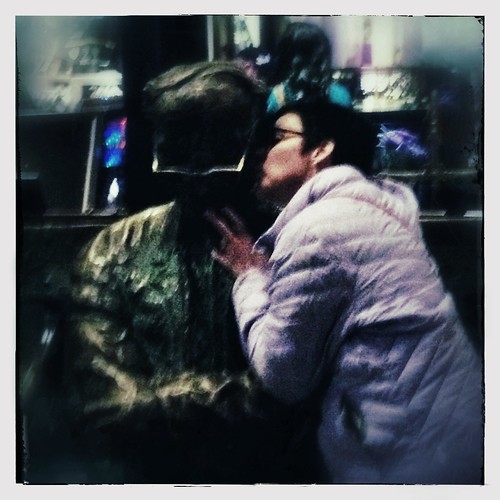 and in February of 2002, while on a practice honeymoon with Jeff, I caressed Harry S. Truman.

10 thoughts on “John Irving will release “Avenue of Mysteries” in the fall of 2015. It’s going to be a good year.”