I’m just going to say it. If Madonna ever calls and wants to grab burritos with me, I will turn down the offer. I probably won’t say this to her face, but I really don’t think we’re compatible. And that’s okay. She’s MADONNA, which means she probably has a lot of friends (both genuine and not so much). I don’t have a lot of friends, but I really like the ones I have, and there’s no room for Madonna in my Hyundai. (I also don’t have room for Mariah Carey, Ashley Judd, or Elisabeth Hasselbeck. In fact, it just took me nearly 20 minutes to care enough about the correct spelling of Elisabeth Hasselbeck’s name to return to this paragraph and change my original Elizabeth Hasselback.)

On the seventh day of spring break, I put green food coloring into my cashew milk/ banana/ almond butter smoothie. We then met a friend for Mediterranean lunch (falafel salad for me!), we went to the oil change dump for an oil/brake light/wiper hat trick, we grocery shopped for beefless beef and liquid aminos (because we are chemists), and now we’re doing laundry. In approximately three hours, I’ll be eating sushi and then knitting for a bit. Also, I need to search out something that will make my mind sharper, and that is such a long story and it probably wouldn’t interest you at all, so I’ll leave it at that. 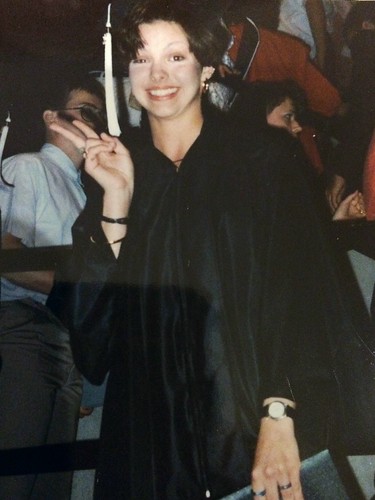 This photo was taken 22 years ago, on the day I graduated from college. I told the dean’s assistant to announce me as Angela Farquhar, and when he did, I laughed and laughed but then found out that it sort of confused (and probably angered) my parents and grandparents and the confusion (and potential anger) sort of outweighed the humor which perfectly explains my incompatibility with Madonna.

At 3:23 in the morning, I typed the following note into my phone: 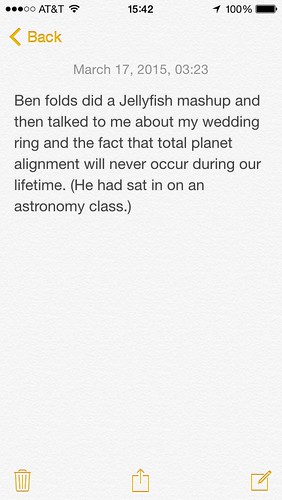 The Trazodone is no longer working, so I believe it’s time to embrace the idea of second sleep. Because life is what you make it, I think I’ll seek out similarly deprived neighbors for semi-regular three in the morning fire pit/harmonica/waffle hootenannies. Babies are welcome. (I’m still a little iffy on the harmonicas. Can it still be called a hootenanny if there is no folk music?) ‘ ‘ ‘text/javascript’>

9 thoughts on “I think I’ll just stick with Waffle Pit Party. (With emphasis on Pit and not Pity!)”