Me: That’s all wrong. I have only one sister.

Dr. W: I can fix it in the computer, unless you want the record to show that you have three sisters. I know I’ve always wanted more sisters.

Later in the appointment we talked about headaches and anxiety, and if you sit down with me for any length of time you’ll learn that headaches and anxiety are two things I can buzz about endlessly. (I can also buzz about seeing both The Commodores and The Beach Boys during the summer of 1981. A woman once accidentally put her cigarette out on my leg during a Helen Reddy show as Helen was singing “Candle on the Water.” I won a national contest for which I designed an eco-friendly Pringles can. I used to have a birthmark on my leg that looked exactly like Africa.)

Dr. W: I think the anxiety is causing the tension that’s leading to your headaches. I’d like you to take an SSRI.

Me: Nope. I don’t want to take pills that make me feel hazy.

Dr. W: Okay. What are you doing right now to control your anxiety and headaches?

Me: Um, essential oils and mind games and magnesium and prayer and avoiding crowds and singing along to Air Supply tunes.

I’ve now been on Celexa for eleven days, and the first seven days were REALLY CRAPPY with haziness and stomach stuff and me thinking entirely too hard about how my BRAIN is being MANIPULATED with a DRUG. But. BUT. I haven’t had even a touch of a headache in three days, and that is worthy of a burrito parade.

The doctor said that it will take four to six weeks to see if the medication is a good fit for me, but because I’m often a fast learner I decided to take my new little buddy Celexa for a test drive last week at a lakeside food truck event.

The parking lot was so full that we had to park in the grass. Normally, this would put me on edge, which is exactly what it did. As we approached the food trucks, I noticed that each truck had a line at least twenty people deep. Normally, this would rattle me, and that’s exactly what happened. Luckily, Jeff knows that I handle myself best when I have some sort of assignment.

Jeff: Why don’t you grab burritos for us, I’ll grab ravioli for Meredith, and we can meet at the hot dog truck for Harper?

Twenty minutes later, the four of us were standing in line at the hot dog truck. As Jeff took the first bite of his burrito, the woman in front of him lit a cigarette and blew smoke all over him. This is the sort of thing that makes me want to eat my own hair and the only way to settle down is to put every bit of my concentration into creating a list of How This Event Could Be Better For Me.

Me: I would really love it if it was maybe twenty degrees cooler. Lightly snowing, even. Or just haystacks and pumpkins. Less halters, more hoodies. That would be good. More dogs, less people. Less flying bugs. Less Meghan Trainor, more something quieter. And it would be dark. And there would be a pit of fire. I need a chai wagon.

I’m still waiting for the Celexa to work all of its magic. Until that happens, I’ll be wandering the streets in these, because I think that’s what Amélie would do. 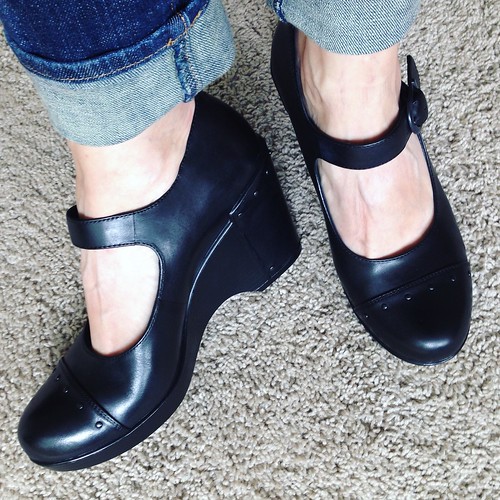 18 thoughts on “Wear cocksure shoes until the drugs kick in.”