This is the time of year when my head rolls around with anniversary memories.

October 25 was the 19th anniversary of the Halloween party during which I got a little tipsy, sprawled on the floor to leg wrestle a co-worker, stuffed a bunch of marshmallows into my mouth, picked up pieces of paper from the floor with my tongue, and decided that I wanted to marry (or at least date) Jeff the Intern.

This photo was taken somewhere between the leg wrestling and the marshmallows: 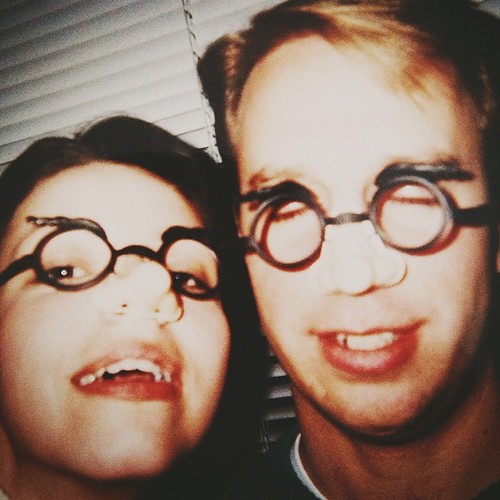 October 26 was the 19th anniversary of the second and final time I ever went into a haunted house. I went only because Jeff was going, and I later found out that he went only because I was going. I held onto his blue jacket during the walk through the house because I was scared, I couldn’t see, and I wanted to feel the spark that results from touching the jacket of a future husband (or at least date). Before leaving his apartment that evening, I gave him a pumpkin. (That is not a euphemism. I gave him a pumpkin.)

October 28th was the 19th anniversary of being asked out by Jeff the Intern.

October 31st was the 19th anniversary of a happy hour that ended with Jeff joining me for diner toast and me joining him during an awkward interaction with his ex’s sister while a funk band blasted cover songs at a bar called Helen Fitzgerald’s. My sweater was unfashionably long, so I tucked it into my jeans and that damned sweater never did anything nice for me.

Yesterday was the 19th anniversary of our first date, which included a navy blue sweater on him and an embarrassingly see-through shirt on me (it was 1996 and I, apparently, was Madonna), and Thai food and an art museum film with the promise of a Lynn Redgrave sighting and coffee at his place and an allergic reaction to Luna, his cat, who enjoyed chewing on the buttons of my jeans.

Today is the 19th anniversary of our second date, which involved peach bread pudding and seeing a movie called Tromeo and Juliet, which was just horrible and inappropriate for a second date, but it didn’t stop us from having a third.

I could go on and on and I would go on and on, but this morning I was sitting at an appointment passing time with a book and I came across the following quote from “Tess of the d’Urbervilles”:

‘She philosophically noted dates as they came past in the revolution of the year; . . . her own birthday; and every other day individualized by incidents in which she had taken some share. She suddenly thought one afternoon, when looking in the glass at her fairness, that there was yet another date, of greater importance to her than those; that of her own death, when all these charms would have disappeared; a day which lay sly and unseen among all the other days of the year, giving no sign or sound when she annually passed over it; but not the less surely there. When was it?’

(Picture my eyes growing slightly wider and then picture me picturing the girls as adults listing their memories and including the day that I DIED and as much as I love thinking about death and what lies beyond (I know!) I also love NOT thinking about death.)

Anyway. Shortly after I read that quote, my doctor told me to stop drinking caffeine after noon. (I still can’t sleep but I refuse to take sleeping pills. I’m DIFFICULT, but she’s willing to work with me because I don’t believe that essential oils will cure cancer and I write with a fountain pen.) She then handed me a few brochures and sent me on my (completely healthy) way. My watch told me that it was 11:53, so I hauled ass to the mall for a caramel macchiato. (Having only seven minutes for caffeine and a mall coffee dump less than two minutes away felt like a hair tousle from the hand of God. Hearing Christmas music play as soon as I walked through the automatic doors was more than a tousle. It was the thrill of a blue jacket in a haunted house, and I mean that in the best possible way.) ‘ ‘ ‘text/javascript’>

8 thoughts on “I move about in a mental cloud of many-coloured idealities, Thomas Hardy.”