On the evening of Sunday, November 23, 1997, I went over to Jeff’s apartment to watch a movie. I ended up crashing on his futon with the plan of heading back to my apartment at 6:00 the next morning to get ready for work.

Upon returning to my apartment that next morning, I picked up a message from my mom telling me that my sister had gone into labor six weeks early. Mom and Dad were jumping into the car to make the four hour drive to my sister’s town, and they were going to stop by my apartment so I could ride with them.

As I listened to the message, the phone rang again. It was my mom telling me that they were less than ten minutes away.

I immediately freaked out (and am still freaking out 18 years later) because had Jen gone into labor fifteen minutes earlier, my parents would have arrived to find my apartment empty. I didn’t have a cell phone! They didn’t have Jeff’s number! Hell! In a handbasket!

I took a Tom Cruise shower, threw on clothes, and ran out to the street to meet my folks. Nearly seven hours later my nephew was born, and although he was wee (cuter than a spider monkey, but similar in size), he was able to lift his head and turn it to watch the nurses pass by his little bed. He was amazing, and he scared the crap out of me (as most babies did before I had my own).

Justin is 18 today and he is funny and smart and thoughtful and kind. If you had to go to the store and pick out an 18 year old, he would definitely be one of your top choices. He’s an Oreo in a sea of Hydrox, and he’s now able to vote. 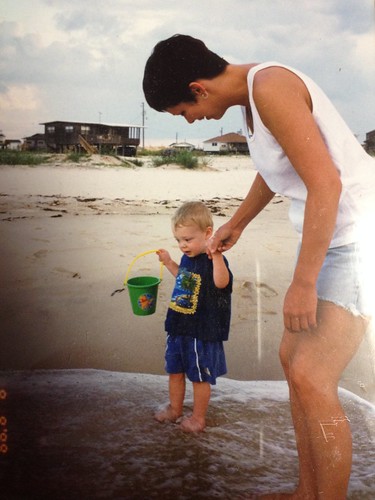 (Three days after Justin was born, the Barney float got away from its handlers during the Macy’s Thanksgiving Parade. Barney had to be stabbed multiple times so that he wouldn’t fly away. It was (and continues to be) one of my very favorite Macy’s parades.)

Happy Birthday, Justin. I’m excited to see how the next 18 years unfold. ‘ ‘ ‘text/javascript’>