In 2012, Meredith participated in her school’s spelling bee.

In 2013, Meredith participated in her school’s spelling bee.

In 2014, Meredith participated in her school’s spelling bee. (It was her final year to participate, and she won.)

In 2015, Harper participated in her school’s spelling bee and although she did a great job, she didn’t want me to talk about it at Fluid Pudding.

Yesterday morning, Harper once again participated in her school’s spelling bee. Because she is now in the fifth grade, this was her final year to participate. 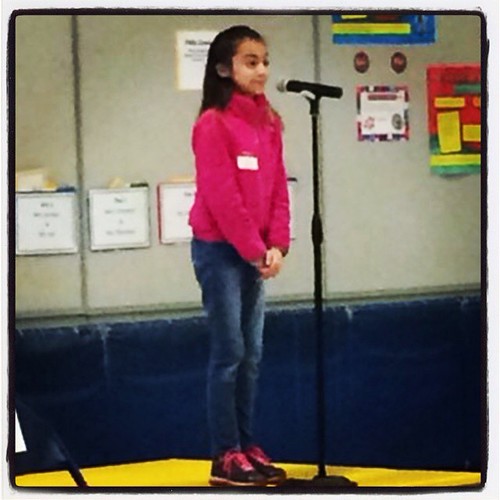 Harper and Meredith are two very different birds. When Meredith made it into her school spelling bees, she studied her ASS off because she wanted to win. She sat with that list of words every single night and constantly asked us to quiz her on words that were especially tricky. Harper? She was proud that she made it into the bee both years at the new school, but when it was time to study the list she wasn’t into it.

Harper: I just don’t want to be the first person out.

Me: But what if every single other person in the bee is studying like crazy?

Things tend to come easily for Harper. She tested into the gifted program in kindergarten, which is the year she wrote a poem that was published in the school’s literary magazine. (She was able to read it at a reception honoring the contributors, and if you follow this link you can watch the reading. (Please know that I’m unable to watch that video without clutching my chest. (My mammogram was normal, by the way.))) Harp is currently the student council president at the new school. She tutors. She sings in the choir. She’s funny and she’s an extremely loyal friend. She doesn’t stress herself out for things like piano recitals and spelling bees, because honestly? I think she knows that in the scheme of things, it’s just sort of cool to be there. (Harper has taught me a lot. Harper continues to teach me.)

Anyway, Harper made it through 15 rounds in yesterday’s spelling bee before she was taken out by Mazel Tov. At that point, 5 of the 21 spellers remained. (I think the bee went 20 rounds before the boy who won last year won again.)

Woman Next To Me: Mazel tov? That’s a really tricky one!
Me: Not if you’re Jewish!
Me: We’re not Jewish.
Me: We go to a UCC church, but I’m a Baptist/UCC blend.
Me: Oh. I guess the bee is still happening. Thank you!
Me (to myself): Thank you? Why am I like this?

When I picked Meredith up from school, I told her that Harper made it through Round 15 before Mazel Tov did her in.

Meredith: When she gets home, I’m going to say “15 rounds is an awesome accomplishment! Mazel tov!”
Me: Don’t. ‘ ‘ ‘text/javascript’>

10 thoughts on “The final bee is under our belts.”