I know Bette Davis died in 1989, but I also know that she was at my doctor’s office this morning sitting in a wheelchair and loudly throwing out phrases like “all that and a bag of chips.”

I went to the doctor this morning for a weird thing and it turns out that the weird thing is actually a MRSA infection (who KNEW?!) and if you’ve been around me at all for the past month or so you honestly have nothing to worry about unless you licked my skull. I don’t want to talk about it. (I’ve contacted the skull lickers because I’m a good citizen.)

While I was sitting there feeling all red-faced and infected with Staphylococcus, my doctor decided to check in on my headache preventative.

Dr. W: How is the Celexa working with your migraines?

Me: I think it’s going really well. I’ve taken maybe six headache pills so far this year, and before the Celexa I was taking one or two each week!

Dr. W: Do you have any side effects that are bothersome?

Me: Well, sort of but I don’t know. I haven’t cried since I started the Celexa and I normally cry all the time about weird stuff like animated elephants sacrificing themselves and little kids singing Stevie Wonder songs. The commercial with the tiny horse that needs a dog door because the other horses won’t socialize with him? That commercial would have destroyed me a year ago, but now I’m just like, “Huh.”

Dr. W: Does it bother you that you’re not crying at those things?

Me: It doesn’t BOTHER me, it’s just that it’s weird to not cry so easily.

Dr. W: Well, you could look at it like this. It might not be 100% normal to bust out crying during commercials. I think you had all sorts of hidden stress before the medication and it manifested itself with gastro symptoms and migraines and maybe even the unexpected crying. BUT, you have to ask yourself if NOT crying bothers you as much as the headaches did. The medication is an anti-depressant, but I didn’t prescribe it because of depression.

Me: I think I’ll keep taking it and be okay with the fact that heroes keep dying and I feel like a migraine-free David Bowie singing a Pink Floyd song.

So, Prince. I’ve spent the past day reading stories and tributes and feeling weird about the fact that I purchased gum for Harper called Raspberry Sorbet less than an hour before Tempe texted the news to me as I sat in the parking lot of a grilled cheese and tomato soup restaurant. (Harper wanted lemon gum, but I went with Raspberry Sorbet. Because of Raspberry Beret. I had no idea what was happening at Paisley Park as I was pulling out my Target Red Card.)

I don’t have any life-changing Prince stories, and I’m not going to pretend that I’ve been a committed fan since the beginning. What I *will* say is that I purchased the soundtrack to Purple Rain a month after I turned 14 back in 1984 and after listening to it over and over again I hid it in my bottom desk drawer because I knew my parents wouldn’t approve of the lyrics. I also knew that this music was not like anything else I was hearing on the radio in 1984. (In 1984 I also purchased the soundtracks to “Against All Odds” and “Footloose.” Huey Lewis and the News. Night Ranger. Duran Duran. Corey Hart. I loved them all, but they were not Prince.) I received “Around the World in a Day” for my 15th birthday along with Phil Collins’s “No Jacket Required” and Paul Young’s “The Secret of Association.” “Around the World in a Day” made it into my car when I got my license in 1986. I have no idea what happened to the Phil Collins or Paul Young. My 18th birthday found me opening “Lovesexy” and Alphabet St. continues to blow me away.

Like I always do when I have no idea what else to do, I made a shirt. 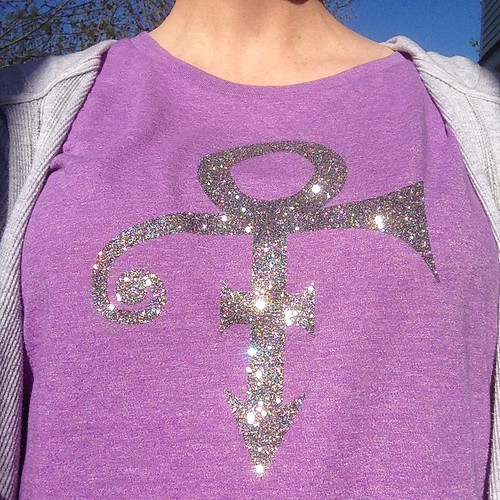 (When I’m 85 years old, I’m sure I’ll have shirts that commemorate all sorts of crazy events. Here’s hoping my great-grandkids know that these shirts could make an amazing time capsule quilt. Maybe.) ‘ ‘ ‘text/javascript’>