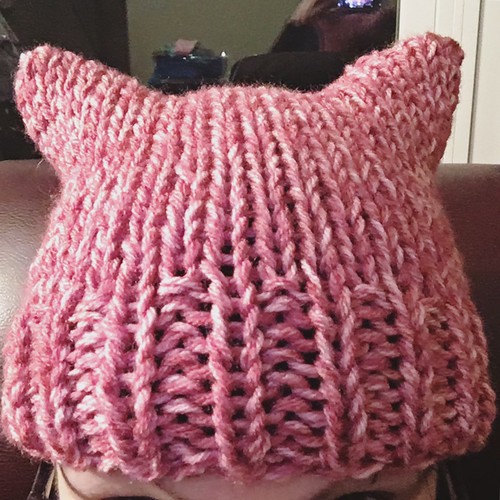 Do this for me: If you’re wearing a cat hat to the march and you don’t *really* need/want it afterwards, please consider donating it directly to a homeless person who is cool with wearing a pink cat hat. Maybe put a warm sandwich or something IN that hat. As a friend of mine said this morning, “You’re helping those in the cold and those hats will, for awhile, be omnipresent on the streets, a reminder of the connection between abject poverty and government’s need to be bigger than some sleezy dipshit who conned his way into the presidency.”

When I was seventeen, my world was all about my hair and my shoes. My hair because it looked like this, which required a bit of time. My shoes because I liked to watch them when I walked. (When you’re watching your shoes, you don’t have to make eye contact with someone who might be laughing at you.) ((I had some issues during Angela: The Teen Years. Angela: Forty-Something is only a tiny bit better.)) Seventeen-year-old me read TIME magazine for a Contemporary Issues class, but didn’t retain anything past quiz time. I had no idea who was fighting whom. I hadn’t even thought about voting. All of this to say: Last week I had the pleasure of knitting a cat hat for a seventeen-year-old girl who is taking a bus to Washington DC this weekend to march for the rights and safety of women. She picked the hat up on Saturday and was completely pumped and today’s kids are breaking cycles and showing up and some of them will be wearing cat hats and some of them won’t, and what they have ON their heads is so much less important than what they have IN their heads.

Some of you like it when the Beatles sing Come Together. I’ve always preferred Primal Scream and: We can still be friends. I don’t care what you’re wearing on your head, unless it’s a hat that says Make America Great Again, in which case we can STILL be friends, it’s just that I’ll be spending most of our friendship checking out my shoes. ‘ ‘ ‘text/javascript’>