Not nearly often enough, I get up on a Friday morning, jump into the car, and drive three hours to visit my sister. This past Friday was one of those days.

When I arrived in Springfield we immediately headed to Subway for chopped salads. Then I took a two hour nap! (I had to sleep off a migraine pill.) Next? Hiking on a rocky path and searching for groundhogs followed by a visit to Ruby’s Market for trail mix and gluten-free muffins. At approximately 1900, we met my nephew and his girlfriend for dinner at Great American Taco Company. And that’s where Things Went Down.

My nephew (J) and his girlfriend (L) are delightful—college freshmen, super smart, refreshingly witty, responsible, and kindhearted. We sat at GATC eating our tacos (mine was NAKED) and talking about baby bicycles and skateboarding injuries and why it’s probably wrong to “borrow” a grocery cart. At some point, I glanced at L’s ear and noticed that she is Pierced. (You have to have at least eight earrings to earn that capital P.)

When I asked about the tiny hoop on the inside of her ear, she explained that it’s called a Daith piercing, and that it has totally obliterated her headaches. Because I was still coming down from the migraine pill I had taken six hours earlier, the hair on the back of my neck bristled—not unlike the hair on the neck of a wolf when he/she sees a sleeping rabbit. (I guess. I’m still trying to understand nature.)

Me: It gets rid of headaches AND it’s cute. As soon as a Daith piercing can fit into my budget, I might have to get it done.
L: I have a coupon! You can get the piercing done for $20!
Me: But what if YOU want another piercing? I can’t take your coupon.
J: I have a coupon, too! If she needs another coupon, I can give her mine!

That was when I sent a text to Jeff:
“$20 piercings. Can I get one?”
Not even knowing what the heck I was up to, Jeff came back with a thumbs up (because he is the knees of the bees), and suddenly my nephew was on his way back to the university for fraternity stuff, and my sister, L, and I were on the way to a place called Next Generation.

When we arrived, I signed all of the “I am not drunk and I don’t have HIV” paperwork, I realized that my driver’s license was back in St. Louis, and I did that thing where I started talking really quickly and saying things that have nothing to do with anything because OCEANS OF ADRENALINE! 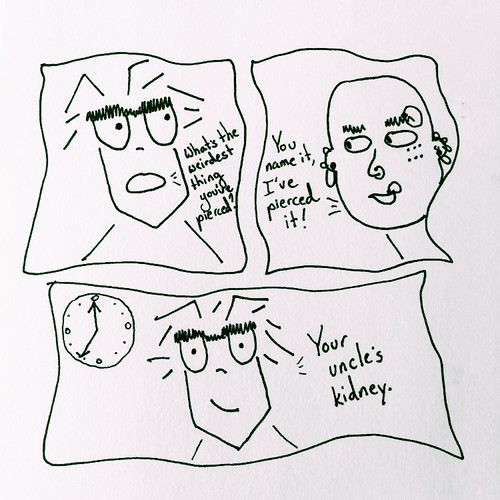 Let me show you what happened next.

The piercer guy told me that it was going to hurt and he explained how to clean the piercing, but he may as well have been reading passages from Moby Dick because my concentration levels had tanked and I had moved on to the annoyingly giggly stage of nervousness. 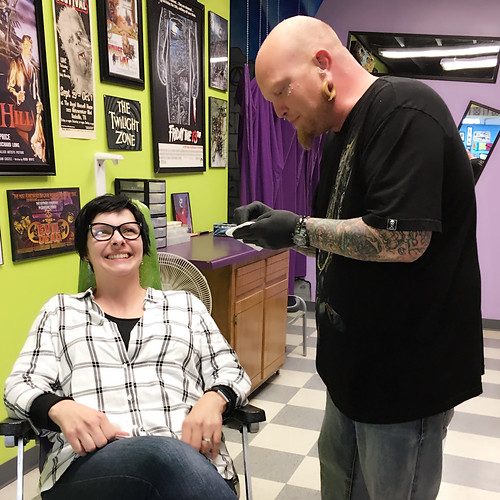 Piercing time.
Me: Will you do a countdown?
Piercer: Nope.
And with that, he stuck a rod the size of the General Sherman Sequoia through the cartilage in my ear. 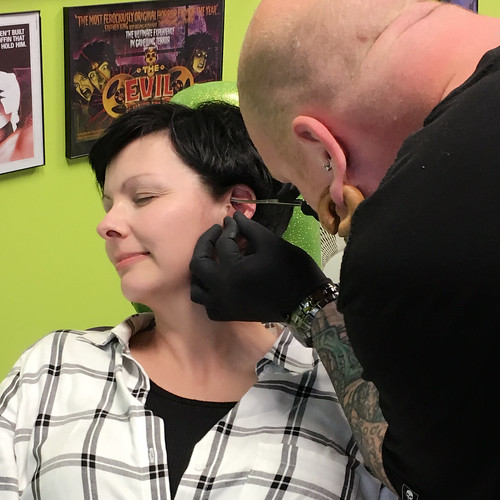 Soon it was time to switch out the rod for the hoop and PAIN! SO MUCH PAIN! Luckily, I had L in the room with me, and she was a great cheerleader. “You’re doing great. This is the hard part. Almost done. Almost done.” There are no photos of the switch, but here I am still wincing at least ten seconds after the hoop was inserted. 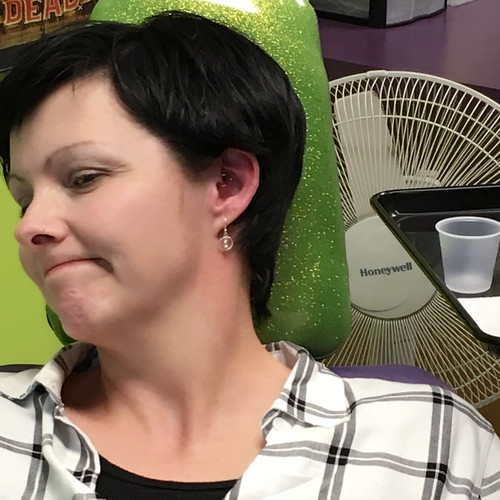 Fun Fact: The piercer told me that my cartilage was soft. AND, I was a bleeder. BUT, he assured me that the bleeding would stop before I walked out the door. (And it did.) 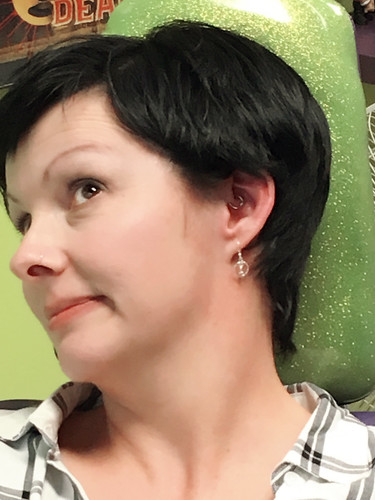 After leaving the shop and dropping L off at her car, my sister and I decided to celebrate. 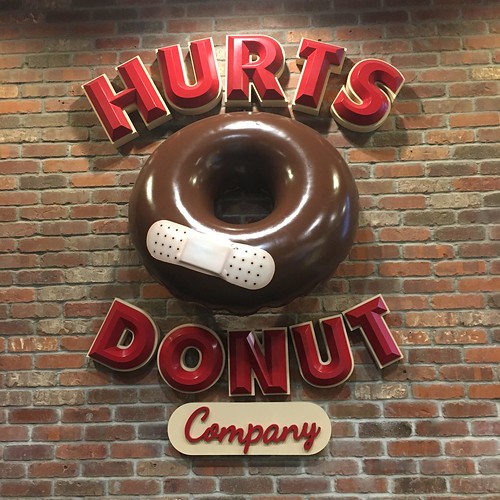 Less than twelve hours later, I filled my car with Half Crocked Honey and drove back to St. Louis—pierced, donutted, and loving the life I live. ‘ ‘ ‘text/javascript’>

12 thoughts on “Embracing the Weasel”