I went to the district jazz concert a few nights back, and I once again feel like I’m cool with the kids being in charge. I really love going out and watching kids doing their thing, which sounds a lot creepier than it really is. (I watched Abducted in Plain Sight this week and Holy Jesus, people.) I’ve been feeling myself age out lately, and it’s nice to sit in a big room and nod my head at the youngers.

As you probably know, when I’m in an auditorium full of people, I tend to freak out a little—especially if my back is to the door. (I have medication, and I believe I give out a Mostly Sane vibe, so we’re all good. Don’t look at me.) To soften all the everything, I pull out a tiny notebook and my Ira Glass pen.

I tend to write things in my tiny notebook and then forget to revisit the tiny notebook, so sometimes reading it is sort of like finding five bucks in your coat pocket. (Or in MY coat pocket. I don’t like sticking my hands into your coat pocket. Harper grew a bunch of bacteria for a science fair project last month and I don’t want to stick my hands into anyone else’s anything anymore.) One of my tiny notebook pages says, “…the sight of an older woman licking an ice cream cone in a nail salon” and “How easy it is to hear patio party as polio party, but I imagine those are two horribly dissimilar events.” (No idea on context.)

The final page before my jazz concert page says, “Tarp tape. I blocked props for a guy on crutches and I stopped a guy from taking a video.” (Last week I volunteered to do crowd control at a winter drum line competition. I busted through 7 energy drinks before my job started so I was RAGED UP FOR KICKING PERCUSSIVE ASSES.) ((Really though, I’ve had one energy drink in my life. That was back on July 4th, 2002 during an Aimee Mann show. No asses were kicked that night, but I *did* bump into Jack Black. He was sweaty.))

-Alto sax timbre makes me think someone behind me is singing.

-I Hope in Time a Change Will Come. Important piece written during a tumultuous time of racial injustice. Sounds familiar.

I’ll leave you with one of my favorite quotes, because we all know that blog entries are not successful unless they contain an image or two. 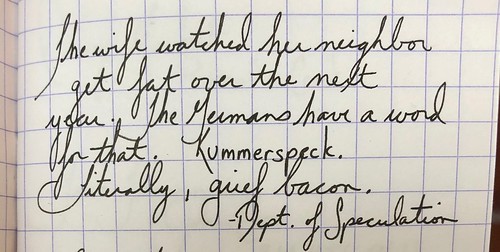 I believe I’m very much susceptible to Kummerspeck.
Evidence: My Lose It! app sent this message to me last week. 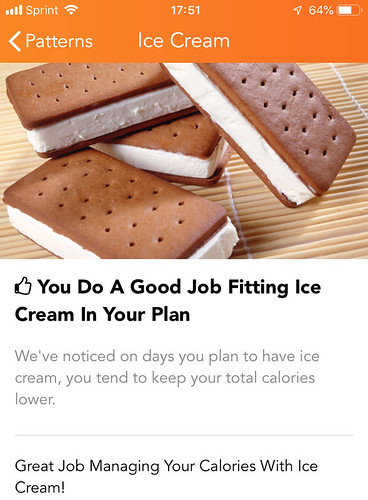