One of the few great things I’ve done in the past eight months? I found a therapist. I hadn’t seen a therapist in nearly thirty years, because: 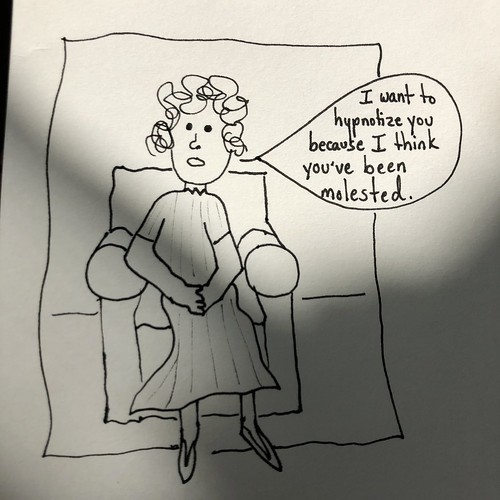 She was super nice (although very much into molestation). The wife of one of my favorite professors. And I’m definitely not against hypnotization. In fact, I let her try to hypnotize me, but I fell asleep on the couch and she seemed a little pissed when she had to wake me up. (She released me as a client shortly after my nap.) 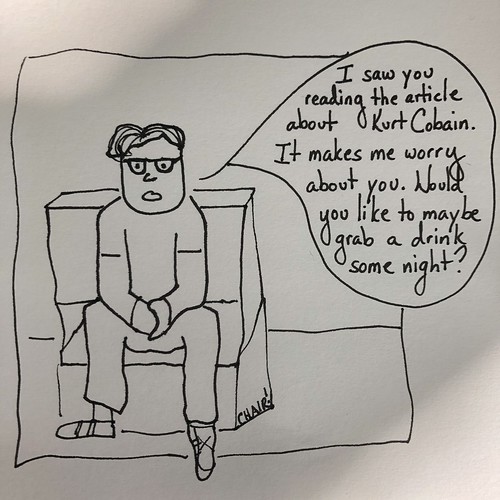 This guy was a therapist specializing in career counseling, and I saw him after I graduated from college while I was bagging up dead folks at the hospital. I did go out for a drink after therapy, but never with Mitchell the Therapist. (I ended our relationship less than a month after Cobain’s suicide.)

Therapist #3:
This is my current therapist, and I’m not going to draw her because I don’t want to reveal her identity. Unlike Therapist #1 and Therapist #2, Therapist #3 asks good questions and makes me talk and our conversations lately have gone a little bit like this:

T3: Your feelings are valid and your happiness is just as important as anyone else’s happiness.

T3: Let’s do a quick exercise. Make a list of the 5 people who are the most important to you.

T3: Now, tell me where you fall on the list.

I love her. She will not fix me, but she might put some tools in my toolbox and we all need tools.

4 thoughts on “Sit beside the breakfast table. Think about your troubles.”