So, three days in a row must mean that not only am I going to throw my goat into the rodeo for NaBloPoMo, BUT, I’ve actually started early.

The girls were off school today, so we celebrated by driving 20 miles south to my doctor’s office, where I made the following announcement:

“I haven’t slept for more than one or two hours at a time in over a month, and sometimes when I wake up I’m making death claws with my hands.”

We talked for a bit (about Halloween and the weather!), he complimented my blood pressure (90/68!), I told him I take 10,000 steps each day (I did last week because a friend threw down a sparkling gauntlet, but this week not so much), and I walked away with a suggestion (to get my heart rate up to a 7/10 daily) and a bottle of Trazodone. And before you click your tongue and tell me about how terrible Trazodone is, please stop. STOP. First, because that clicking sound makes me so angry, and finally, because I’m impressionable and I don’t want to swallow a pill tonight thinking, “This is the pill that made ArizonaSportsFan24 want to die.” Instead, I will swallow that pill thinking, “This is the non-addictive pill with little to no side effects (except for that weird priapism thing) that will get me back on the road to wellness.” And in a few weeks I’ll feel great and will stop the pills. The End.

After the appointment, I took the girls to the mall because I was jonesing for some quick and easy coffee, Harper felt that she deserved hot chocolate, and Meredith was having visions of cinnamon sugar pretzel nuggets. Plus, we needed tights, and I wanted to find a pair of cheap and casual black boots. (Success. $12.)

In approximately 10 minutes we’ll be driving to the store for avocados, spinach, French bread, and bananas. And then I suppose I should start thinking about cutting a hole or four into a pumpkin. I’ve never been a fan of Halloween, mainly because hell is people coming to my door, regardless of their age. (Last year we put a cauldron full of candy outside with a sign that said, “Please take one or two.” Less than ten minutes later, the cauldron was empty because someone clearly couldn’t read.) Now that we’re in a subdivision with 34,239 kids, I have no idea what to expect.

This photo was taken exactly seven years ago. 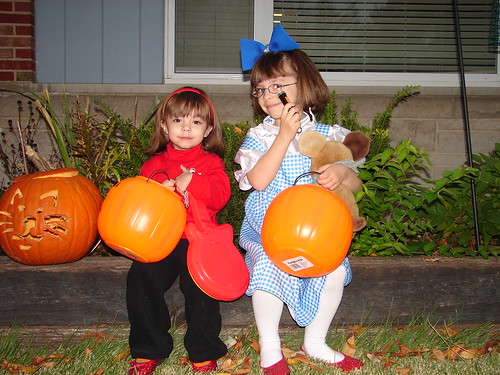 Meredith was Dorothy from The Wizard of Oz, and Harper was Murray Wiggle.

This year, Meredith will be Hazel Grace Lancaster from The Fault in Our Stars, and Harper will be Glimmer, the career tribute from District One in the Hunger Games.

9 thoughts on “They should have Halloween on St. Patrick’s Day.”