1. All About My Mammogram

I had my annual mammogram appointment on Monday. (If you’ve never had one, I explain the entire process over here.) Anyway, my past two mammograms were abnormal which led to more scrutiny before I could receive my final Nice Chest! certificate to hang in the foyer. In other words, the dénouements of Cancer Scare 2014 and Cancer Scare 2015 were as anti-climactic as Y2K. (Thank God.) BUT, that isn’t stopping me from feeling a bit restless in 2016. I should have a letter in ten days.

As I sat in the mammogram waiting room, a woman entered the office and said the following to the receptionist:
“Hi. My mammogram appointment is scheduled for next week, but I was in the area, so I thought I would go ahead and have it done today.”

Believe it or not, they worked her in. They were booked solid, yet they worked her in and I still don’t know if I should hiss or cheer. (My grandma used to show up for appointments a few hours early with the hope that she could be worked in. This woman took Grandma to a whole new level.)

2. All About My Hair

This morning I had a haircut appointment at 9:30. For the first time in ages I took in a Dreamy Hair photo, which was sent to me by a woman who once shaved some triangles into the side of my head and then allowed me to amble around in a tiger suit. I trust her completely, even though I wasn’t allowed to attend my Uncle Ray’s funeral because of the triangles. 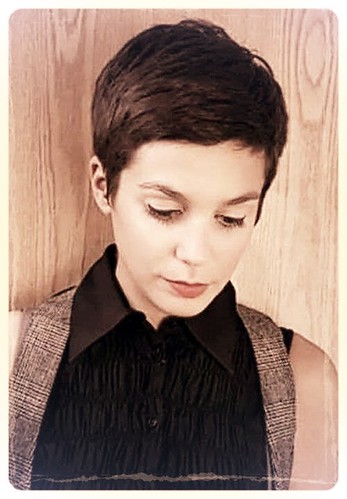 When I asked my tress artist (I just made that up) how long it would take to achieve the hair in the photo, she told me that I could have it in March if I was able to chill out and let it grow. This afternoon I will cast on a bright green beret to take me through the awkward stages. My next haircut is scheduled for March 5, which is 58 days away. To give myself something else on which to focus, I’ve reinserted my nose hoop and am attending yoga camp.

3. All About Yoga Camp

My headache doctor will not shoot botox into my shoulders, and although she’s cool with occasional massages she thinks I’m goofy for choosing passivity for headache relief. (Yep. I’m still getting headaches. They aren’t horrible or frequent, but they’re still there.) Anyway, she remembered that we had talked about yoga several times in the past and she mentioned how she wishes I would take her advice. Then (THEN) she said, “Instead of a six month follow-up, I want you to come back in THREE months, and all we’re going to talk about is how much you are enjoying YOGA, damnit!” (I added the damnit, but I do believe it was implied.)

Anyway, because just enough people have mentioned Yoga With Adriene, I went over to her site and noticed that she was starting up a 30 day yoga camp on January 1. I’m in. Not only am I in, but I’m loving it, mainly because I really dig Adriene’s style which is very much “do what feels right” and absolutely no “your heels MUST touch the floor.” I now know enough about yoga (and myself) to know that I really hate downward dog, I really love child’s pose, and I really kick ass at lion’s breath.

13 thoughts on “What You Need to Know”